Investor attention has pivoted over the past few weeks from the war in Ukraine back to the accelerated unwinding of global monetary accommodation. While the war could still pose further threats to economic growth, global bond markets have struggled as central bank policy rate expectations move higher. As the war settles into an apparent stalemate accompanied by improving odds of a ceasefire agreement, rallying risk assets suggest that underlying global growth conditions are much better than a flat yield curve forecasts. Evidence exists that some investors have been selling bonds and buying stocks.

It remains to be seen whether equities can sustain recent advances against a backdrop of high and rising bond market volatility. During the last economic expansion, equities benefitted from low inflation and central banks’ prompt policy support whenever investor confidence sagged. Central banks have no such latitude today and now face the uncomfortable prospect of having to engineer slower growth to tame inflation. The Fed is far behind the curve that both growth and core inflation will likely increase in the year ahead if it does not push interest rates higher. Markets are now discounting 200 bps of additional Fed rate hikes by early next year. However, the real rate will still be negative at that point, implying continued monetary accommodation and ineffective inflation policy.

Engineering a soft landing is a difficult maneuver to achieve. The Fed must tighten quickly enough to keep long-dated inflation expectations anchored; on the other hand, the Fed wants to avoid tightening so quickly that it causes a recession. The commodity price shock and the additional impact on the global supply chain will clearly create additional price pressure in the months ahead relative to what would have otherwise been the case.

We believe there is a low probability of a U.S. recession developing in 2022. Despite high inflation, U.S. consumer spending should remain strong in the year ahead, buttressed by a strong job market, healthy balance sheets, and the reopening of the service sector as COVID headwinds fade. The outlook for investment spending is also solid, given robust corporate profits, a still-low cost of debt, and the ongoing need to upgrade technology and modify supply chains. Worries about Fed rate hikes killing the expansion anytime soon are misplaced. The real Fed funds rate is deeply negative, and the nominal rate is far below the consensus estimate of nominal potential GDP growth for the next several years. The yield curve is an important indicator of a recession that briefly flashed a warning signal in late March. Fed Chair Powell recently down played the 2-10 yield curve (we prefer the 90-day/10-year curve) as a recessionary indicator, instead pointing investors to the market-implied change in the fed funds rate over the coming 18 months.

Short-term, we believe bonds are oversold, and a further pullback in yields is likely in the near term. However, our baseline scenario of an ongoing economic expansion and sticky headline and core inflation imply that bond yields are certain to have other waves higher on a 6-12-month horizon. Real bond yields across the maturity spectrum remain unsustainably negative. In other words, the bond bear market has further to run. We expect investment grade and high yield spreads to remain tight by historical standards on a 6-12-month horizon, allowing corporate credit to outperform similar-duration government bonds.

The outlook for equities has deteriorated since the beginning of the year. Despite this, we still recommend an overweight position in stocks over bonds. A decision to downgrade stocks in favor of cash would require expectations of a significant further decline in U.S. equities. The risk of such an outcome has increased. While we expect that investors will experience a recession scare at some point over the coming 6-12 months, we do not expect a recession.

The ongoing economic expansion will be a tailwind (“earnings tailwinds”) for stocks over the next 6-12 months but offset by underlying upward pressure on bond yields (“valuation headwinds”), and all of this is accompanied by above average volatility. The earnings outlook remains broadly supportive if the economic expansion continues, as we expect, although the pace of growth will moderate further. Earnings estimates for most markets have held up well in Q1.

Higher commodity prices (especially oil) will likely displace some spending on goods and services. The good news is that energy goods and services spending as a percentage of income is much lower today than in the past, so recessionary concerns stemming from higher gas prices alone are overblown. However, the war in Ukraine has raised energy prices and increased food and industrial metals prices. Commodity prices and the U.S. dollar will likely be positive in the near term.  Still, risks are to the downside for both assuming a likely settlement between Ukraine and Russia and the ongoing reopening of the global economy. 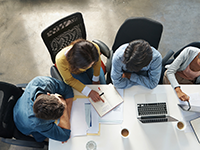